Yesterday, the World Health Organization (WHO) sent out a press release stating that processed meats are carcinogenic to humans and that red meat is probably carcinogenic to humans. Since I frequently mention my proclivity as an ominvore, I’m sure most of you think that this post will try to debunk the WHO’s findings. Well……surprise! I actually think the WHO’s findings are great! I believe nutrition is a very important issue, especially in the U.S., and informing individuals on the health effects of certain foods is extremely important. Also, I’m a big proponent of having diversity in one’s diet. If you read the press release, the WHO states that eating more than 50 grams of processed meats (approximately 2 slices of bacon) or 100 grams of red meat (approximately 1/4 lb burger) a DAY can increase the risk of certain types of cancer. It DOES NOT suggest that people should stop eating meat. In fact, the WHO states that “red meat has nutritional value” and that governments should use this information to educate their citizens on proper nutrition. The WHO press release DOES NOT say that processed & red meat are as carcinogenic as tobacco or asbestos, as some media outlets reported. Check out the screen grab below from the WHO’s Twitter page for a more in depth explanation of the classification.

I am a meateater and will continue to eat meat. I will also continue to eat a diverse diet in order to limit my processed & red meat intake. Veggies, fruit, starches, nuts, seeds, poultry, dairy, the occasional adult beverage, seafood, and everything else in between. I believe all these foods along with processed & red meat have allowed humans to become the ultimate omnivores. 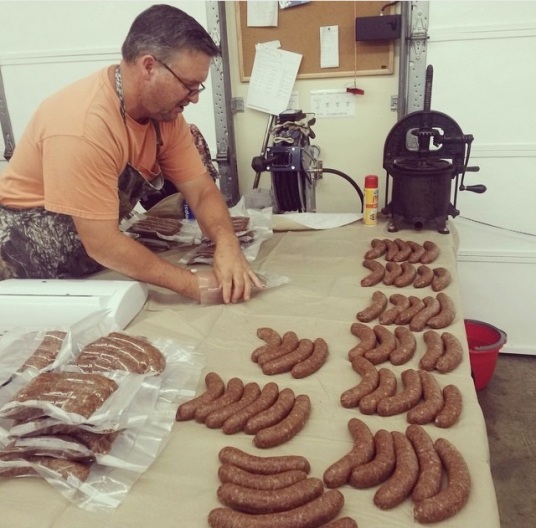 I hope the WHO press release will motivate individuals who rely on processed & red meat as their primary protein source to diversify their diets. I know I’m only scratching the surface of this issue, but I wanted to clarify some misinformation, and further promote the positive side of the WHO’s findings. If you have any comments please leave them below.

Last week, I limited myself to seafood & plant based sources of protein. During that time I discovered that lentils are a great source of protein and I’m happy to say that they are now a regular part of my diet. Removing land-based animal protein from my diet was relatively easy, but I prefer the variety I’m allowed in a non-discriminatory omnivore diet. However, the number and quality of protein choices at my local supermarket isn’t exactly impressive. That is why I was one happy camper when my parents visited last week and brought a cooler full of wild game meat with them. Several pounds of both venison sausage and Canadian Goose breast all obtained and processed at my family farm in Maryland. Not only is wild game meat generally more nutritious than commercially raised livestock, but possessing the knowledge of where that animal lived, what it eat, and who processed it makes wild game meat my preferred form of protein.