Earlier this year I wrote about the recent rise in popularity of the sweet potato. I attributed the 80% increase in consumption of sweet potatoes in the U.S. between 2000 – 2014 (source) to the emergence of the Paleo Diet. Before the Paleo diet even made it into modern-day vernacular, sweet potatoes were a regular Thanksgiving Day staple, even though they were often referred to by another name.

Multiple varieties of sweet potatoes have been grown in the United States since colonial times. In order to differentiate the different types, farmers used the term “yam” which was derived from the name of a root vegetable native to Africa that closely resembled the sweet potato. This was the start of the culinary name game and eventually led to the USDA including “sweet potato” on the label of yams sold in the US (source).

If you really want to include yams in your Thanksgiving, you’ll have to hit up the international supermarkets. It may be worth the trip because real yams do have some nutritional advantages over their starchy doppelgänger. 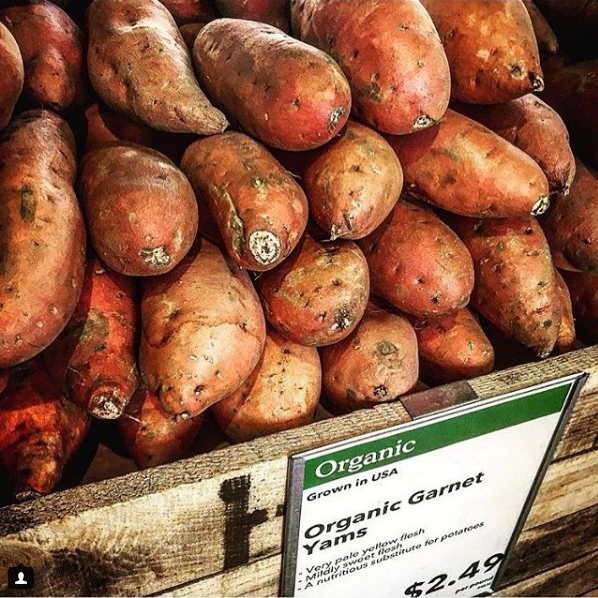 When compared to 1/2 cup of peeled and boiled sweet potatoes, yams contain:

Ultimately, if you’re looking for foods lower on the glycemic index, you’ll want to seek out true yams. That may be a good idea on Thanksgiving considering Americans consume an average of 3000 calories during Thanksgiving dinner alone (source).

A few tricks you can utilize to avoid holiday binge eating include chewing your food more thoroughly, putting your fork down between bites, not going back for seconds and completing the following workout before sitting down for your Turkey day feast. This workout focuses on your core, which is another reason you’ll want to complete it BEFORE you eat dinner on Thanksgiving. I recommend performing the following exercises in superset format, which requires you to complete a desired number of repetitions for 3 separate exercises in succession.

Supersets allow you to up the intensity of your workout in a shorter period of time. A shorter, more intense workout will give you more time to spend with friends and family. Just make sure you warmup and modify the workout to match your fitness level.

Let us know in the comment section below if you completed this or any pre-holiday workout. ENJOY & HAPPY THANKSGIVING!